Thankfully you can get a great deal of smartwatch for your money right now. As new generation smartwatches release the older models drop in price. This leads us to a time in the life cycle where you can pick up big brand names like Sony and Samsung, at budget prices. Below, we have provided recommendations for what we believe to be the best cheap smartwatches in [year]; many are last-generation products, but remember – you get 80% of the speed and features of a latest-gen product, for sometimes 50 percent less, when you opt for something released a year or so ago. It’s a win-win.

So without further ado, let’s go through the top cheap smartwatches in [year], these are the pick of the bunch, flagship smartwatches that won’t break the bank. 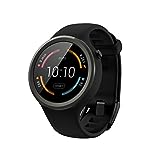 The 1st generation Moto 360 was released in 2014. The latest model, the Moto 360 Sport, is a great smartwatch, with a bright round display, stainless steel case, responsive performance, and good battery life overall, thanks to a 320mAh battery. Available for $80-$110 from various retail outlets, the Moto 360 has an all-day battery life and runs Android Wear, coming pre-installed with useful apps and Motorola’s sleek clock faces; the screen itself is a 1.56” unit with a resolution of 320 x 290, which is perfectly acceptable for a screen of this size and best of all, the Moto 360 Sport still looks like a latest-gen product on the wrist. 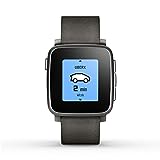 Pebble Steel
One of the best features of this watch its battery life; it’ll last for 5 to 7 days
Buy on Amazon

Released in 2015, the Pebble Steel is a second-generation smartwatch. It’s a big upgrade over the original Pebble, launched in 2014, and it retails for around $100 online. You have a choice of a matte black or brushed stainless steel finish, and a leather or metal band. One of the best features of this watch its battery life; it’ll last for 5 to 7 days, thanks to the unique 1.26-inch e-paper display, which sips power compared to LED and OLED displays. This is also one of and if not the best Android Wear alternatives, running Pebble’s own OS, yet it’s still compatible with both Android and iOS devices. 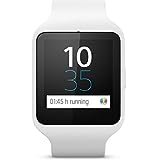 Sony Smartwatch 3
the Sony SmartWatch 3 has GPS and NFC built-in and it also has a useful 4GB of internal storage, to store your apps and music.
$466.47
Buy on Amazon

Also known as the SWR50, the Sony SmartWatch 3 was first announced at IFA 2016. It’s a very fast smartwatch with a good screen and the battery life will last for around two days, which is more than any other smartwatch with a 1.6-inch 320 x 320 display. The SmartWatch 3 is also IP68 rated, so it’s waterproof, and it runs Android Wear with access to a wide range of excellent applications. Unlike many other Android Wear smartwatches from this generation, the Sony SmartWatch 3 has GPS and NFC built-in and it also has a useful 4GB of internal storage, to store your apps and music. It retails for around $130 online. 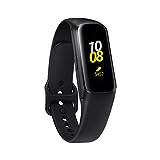 Samsung Gear Fit
It is more like a band than a smartwatch
$99.90
Buy on Amazon

What’s good: More of a wristband than a wristwatch; ideal to replace a fitness band.

The Samsung Gear Fit isn’t like the other smartwatches on this list; it’s more like a wristband than a wristwatch, courtesy of a widescreen display. That display is actually very good, with deep, rich colors, and scrolling on the screen is a slick experience. It connects to your smartphone by Bluetooth, and it will last for around three days on a single charge, thanks to a 210mAh battery. We recommend this device for people who’d like to combine their fitness band and a watch into one. The Gear Fit is rugged and durable and automatically senses what activity you are performing. It can be picked up for around $120 online.

Pebble Time
It has a geeky but fun design; it has been compared to a GameBoy Colour in that sense, and we can see why.
Buy on Amazon

The Pebble Time was released in 2015. It was the first Pebble to have a color e-paper display, as well as a microphone. It has a geeky but fun design; it has been compared to a GameBoy Colour in that sense, and we can see why. You control the watch through four buttons on the side, and it connects to your smartphone via Bluetooth. In terms of battery life, you are looking at a week. This was the successor to the original pebble; it has a sleeker design and it’s faster. This watch retails for around $90 online, which isn’t bad at all, and the apps available – while limited in number compared to Android – are fun and functional. 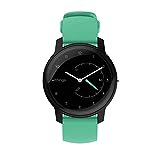 Withings Steel HR Sport
It has an analog appearance, with some of the best features of a smartwatch
Buy on Amazon

Not too bothered about having a touchscreen? Then consider the Pop. The Withings Activité Steel HR was launched in 2018. Unlike the other smartwatches on our list, the Activité Steel HR has an analog clock face with fitness tracking sensors built-in. It runs off a regular coin cell battery, lasting around 8 months’ in-between battery charges. It’s well made and very stylish, with the ability to track your walks, runs, swims, and sleeping patterns. It automatically senses what activities you are performing, and has an analog dial to show your daily step progress.

Alcatel OneTouch Go
One of the cheapest option, but it lacks a lot of apps and features that other Android Wear devices have
Buy on Amazon

The ALCATEL OneTouch Go smartwatch is the best-looking smartwatch you’ve never heard of, it covers the smartwatch basics well, with a battery life that lasts for two days, excellent build quality, and a very handy integrated charging cable. It comes preinstalled with fitness apps and music apps and connects to your phone via Bluetooth. The caveat? It runs bespoke software, so it lacks the range of apps offered by Android Wear devices. However, it looks every bit as good as smartwatches which cost three times as much, and if you can look past that caveat, and for its price, it will nap you a very well made and stylish smartwatch.