When one is in the market for a luxury timepiece, one might pay their local Omega or Rolex boutique a visit. Or if we are talking really high-end stuff, then one might make an inquiry with the likes of Patek Phillipe, Greubel Forsey, and Richard Mille.

Depending on how ‘luxurious’ you want to go, when you step into the world of luxury watches spending £100k is nothing. Smartwatches meanwhile are comparatively cheap and while they might not have automatic movements laced with precious metals or complications, they do offer greater functionality and, in cases, comparable build quality.

I am not talking about the likes of the Apple Watch or HUAWEI Watch here – I am talking about smartwatches from respected Swiss watchmakers, of which there are quite a few to choose from. So in this article, we will discuss luxury smartwatches and what the best ones are right now, as well as the watches that are concepts and those that are coming soon, to help you choose a smartwatch that’ll complement your watch collection.

Bear in mind that most of the watches of this list are hybrid smartwatches.

Alpina Horological Smartwatch
Compatible with both Android phones and iPhone
$351.43
Buy on Amazon

Unveiled last year, the Alpina Horological is an analog smartwatch with a Bluetooth chip that hooks up to your smartphone. Utilizing the Manufacture Modules Technologies platform, which is a Swiss Joint Venture SARL and Fullpower’s MotionX, it has all the fitness tracking capabilities of a fitness band but the style and quality of a Swiss watch.

Compatible with both Android phones and iPhone, the Alpina Horological has a battery life of two years and offers activity tracking, sleep monitoring and sleep cycle alarms. The watch itself is made from stainless steel and has a regular MMT-285 quartz movement. The dial is available in black or ‘silvered sunray’ and it is protected by a sapphire crystal. Both of those versions can be had on a stainless steel bracelet or a genuine leather strap, and there’s a 39mm version for ladies and a 44mm version for men (although, they are actually unisex).

The Alpina has two analog dials; one that tells the time, and one that gives you a visual indication as to your physical activity. It’s a nice looking watch – but it’ll cost you. Most online stores have it for sale at £850-£950. So, you’ll have to really dig it to get one.

Frederique Constant Horological Smartwatch
The case is 42mm so the men’s version is smaller than the Alpina men’s version
$1,000.00
Buy on Amazon

The Frederique Constant Horological is, for all intents and purposes, simply a reskinned version of the Alpina Horological. It has the exact same technology, the exact same two-year battery life courtesy of the same MMT-285 quartz movement, and a very similar convex sapphire crystal protecting the two analog dials.

Where the Frederique Constant differs from the Alpina is in dial design and size. The dial on the Frederique Constant Horological Smartwatch has roman numerals and a dressier feel overall. The case is 42mm so the men’s version is smaller than the Alpina men’s version. The Constant is available in two case finishes; stainless steel and rose gold-plated stainless steel, and with a few different straps, including a metal bracelet and two genuine leather bands.

Other than that, there’s little to say about the Frederique Constant Horological Smartwatch, other than it costs a bomb – about the same as the Alpina. 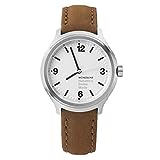 Mondaine Helvetica 1
the nicest design of all the smartwatches on our list
$171.99
Buy on Amazon

Mondaine is best-known for its iconic Swiss railway watches but their Helvetica line, which is inspired by the Helvetica font, is as special. Mondaine has released a few different versions of the Helvetica but it’s the Helvetica 1 you want for smartwatch features.

The Mondaine Helvetica 1 is a 44mm analog smartwatch powered by MotionX. It has arguably the nicest design of all the smartwatches on our list with a sleek stainless steel case that’s also available in gold and black courtesy of ion plating. The Helvetica 1 boasts a 2-year battery life and has two dials; one to tell the time and one to give you a visual indication as to your daily fitness progress (it will tell you how close you are to meeting your step count).

Protecting those two dials is a sapphire crystal with anti-reflective coating and you can get the Helvetica on leather or rubber. It takes any 20mm strap, though, and we reckon it’d look great on a high-quality shark mesh strap or a Nato or Zulu strap. The Helvetica is a bargain too compared to the Alpina and Frederique Constant with it coming in at £540-£650 online.

Movado Connect 2.0
It's equipped with Google Fit for activity tracking, Google Pay for quick payments from your wrist and Google Assistant
Buy on Amazon

Movado Connect 2.0 is a luxury and stylish digital smartwatch powered with Wear OS by Google. It’s Android/Apple iOS compatible. The Movado Connect 2.0 is a 40mm size, and it’s made with a stainless steel case with a ceramic case back and round digital touchscreen dial featuring hundreds of customizable dial variations on a black interchangeable leather strap. It displays phone calls, appointments, emails, apps, music, text, and social media messages; equipped with Google Fit for activity tracking, Google Pay for quick payments from your wrist and Google Assistant; Heart Rate Monitor; Programmable Pushers; Smart Crown; charging cable for a smart module. It also has Gorilla Glass Crystal: A thin sheet of glass that is able to survive the real-world events that most commonly cause glass failure. This glass has improved damage resistance and toughness by helping to prevent the deep chips and scratches that cause the glass to break.

Samsung Gear S2 Rose Gold
The regular Gear S2 is actually a really good smartwatch and the rose gold version is identical as far as technology is concerned
$259.95
Buy on Amazon

A new addition to the Samsung Gear S2 range for January 2016, the rose gold Gear S2 is a really nice piece of kit. This particular model has an 18-carat rose gold plated stainless steel case and it sits on a white leather band, however, there are other leather bands available.

The regular Gear S2 is actually a really good smartwatch and the rose gold version is identical as far as technology is concerned. You get a really nice 1.2-inch circular AMOLED display with 360 x 360 resolution and the 250mAh battery is good for a day’s use. It runs on a dual-core processor so the Android Wear experience is really slick. What we mean by that, is that apps open and close quickly and swiping through menus presents no lag whatsoever.

Samsung has also designed a few unique watch faces for the rose gold edition to match the color of the case. If you have a significant other, you’ll be intrigued to learn that there’s also a platinum model available aimed squarely at men. A great gift idea, no? 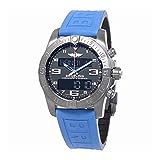 The B55 Connected has an all-titanium case and an analog dial protected by glare-free sapphire crystal. The movement is SuperQuartz and battery life is rated at two months. The face of the watch has two separate LCD displays which in addition to an analog dial and these offer up information such as emails, phone calls, and events, and the watch also boasts a flyback function and electronic tachymeter. None of those screens is touch-sensitive though – all features are controlled by your smartphone using a dedicated app. While this may sound limiting, it means that Breitling has been able to incorporate features into this watch that would otherwise be impossible with a regular chronograph.

Michael Kors announced their first smartwatch line, Michael Kors Access, not time ago, but it is only now that more details are starting to emerge.

What we know so far is that the smartwatch line will be powered by Android Wear exclusively and there will be a version for “him” and for “her”. The men’s version appears to be black or dark stainless steel in press videos while the lady’s version is gold. Michael Kors has put a huge emphasis on the design of these smartwatches stating that the devices are geared towards the “fashion-focused consumer” with “glamorous style”.

The smartwatches will be compatible with both iPhone and Android-powered smartphones and they will launch with exclusive Michael Kors watch faces preinstalled. The bands themselves are interchangeable and the announced US price is $395 USD. The watches will be available in Michael Kors stores before becoming available in other retail outlets. There are no tech specs available just yet, but we will update this article when they are announced.

Heuer Connected 41 & 45
One of the best-made and most luxurious smartwatches on the planet
$2,475.00
Buy on Amazon

The Tag Heuer Connected is one of the best-made and most luxurious smartwatches on the planet, not to mention one of the most in-demand. It’s only available on a black bezel with brushed stainless steel lugs and a stainless steel chrome case, but there are seven colors to choose from when it comes to rubber straps, and on all of them, it looks great.

The Connected is compatible with devices running Android 4.3+ or iOS 8.2+. This was the first smartwatch to use an Intel Atom processor and this runs the latest version of Android Wear smoothly. In fact, it offers one of the fastest software experiences overall and we reckon it’ll be futureproofed for a few years at least. The display is a 1.5-inch LTPS LCD unit protected by sapphire crystal. The Connected is 12.8mm deep on the wrist and it weighs 52g so it’s around the same size and weight as one of TAG’s automatic timepieces.

It connects to your phone by Bluetooth LE or Wi-Fi and you’ll get “around a day’s” use from the 410mAh battery according to TAG themselves.