Recommended read: Wear OS vs Tizen – what should you get?

The following smartwatches are compatible with iOS, from the iPhone 6 and forward.

You may find interesting to read: List of The Best Smartwatches

This might be obvious but the Apple Watch 5 is the best smartwatch for iPhone users on the market right now if you can do without cellular connectivity. It does almost everything the LTE version does, except receiving calls and notifications over a cellular network. The upside to this is the price; the Apple Watch 5 is cheaper than the LTE version, and it can’t possibly charge you extra to stream data from the watch. Thrifty. And for many people, the lack of LTE isn’t a big deal.

With in-built GPS and GLONASS, the Apple Watch Series 5 tracks workouts perfectly and instantly syncs that data to the iPhone when paired. You also get a heart-rate sensor for even more in-depth data.  Elsewhere, the Apple Watch 3 impresses with its speed and functionality. It’s easily twice as fast as the Apple Watch Series 4 and the digital crown feels reassuringly robust while providing one of the most intuitive ways to navigate the OS.

The only real downside to this version of the Apple Watch is that you can’t stream music on the go. You download it first. But of course, there’s a solution for that… and that solution lies with Apple themselves and the Apple Watch Series 5 LTE. 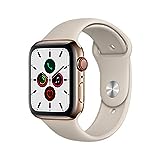 The Apple Watch Series 5 LTE is mostly the same smartwatch as the regular Apple Watch Series 5. The biggest differences are that it adds cellular data (LTE), and it is available with a premium silver or black stainless-steel case in addition to an aluminum one. It also has a ceramic case back, which is much more scratch-resistant than the composite back on the non-LTE model. The cellular version also increases the internal storage from 8GB to 16GB.

So, the Apple Watch Series 5 LTE offers a few upgrades over the standard Apple Watch Series 5, but is it worth the premium? Well, the addition of cellular data adds functionality to the Apple Watch, offering users the ability to receive phone calls, app notifications, and stream music untethered from their iPhone and without the assistance of a Wi-Fi network.

Whether or no cellular data is worth the premium depends on where, when, and what you will use your Apple Watch for. Right now, the LTE cellular functionality is only useful for receiving calls and streaming music, and even then, it’s not a perfect “untethered” feature, since your iPhone must have the same carrier as your Apple Watch.

Read the full review of the Apple Watch Series 5 here.

Best Smartwatches 2020 - The Ultimate List Of Wearables You Can Buy Today!